Surprise: You’re now the book editor at a major newspaper!

Posted by Clint Kimberling on November 09, 2015

Today marks the beginning of University Press Week and UPM is very excited to once again participate in the AAUP blog tour. The theme for today's posts is Surprise (which also matches the online gallery theme) and gives us a chance to talk about a venture that not only surprised us, but is also something we're very proud of.

The following post from Steve Yates, UPM's Marketing Director, writes about the surprising results of a collaboration between our university press, an independent bookstore, and a daily newspaper.

This is acutely haunting to me. All my nightmares have come true! At seventeen-years-old I was hired by the Springfield, Missouri, News-Leader (the largest newspaper in the Ozarks) as a sports writer and agate clerk, a part-time job that was nearly always full time except in summer.

When I came to Jackson to work at University Press of Mississippi in 1998, the only way to see my wife while we were both awake was to moonlight. I worked as a part-time copy editor while she designed and edited the business section at the Jackson, Mississippi, Clarion-Ledger.
My wife, Tammy Gebhart Yates, worked first at the News-Leader, and then at a succession of newspapers, the last a fifteen-year stint at the Clarion-Ledger. She survived several layoffs—one in which she was terminated then rehired the same morning—before being permanently let go in August 2013.

So I have mixed feelings about this surprise. Doing something for free that other, more qualified journalists once did for a living sometimes just doesn’t feel right. But then, really, before the Mississippi Books page came about at the Clarion-Ledger, nothing remotely like it had existed in the seventeen years I have been a subscriber.

Just before the Great Recession, one of our key bookselling partners, John Evans at Lemuria Books in Jackson, hatched an idea. Since I was in email contact frequently with all our Mississippi independent booksellers (and we have a lot of them) why not ask them to report a top ten bestsellers list each week? Call it, “The Mississippi Bestsellers List.” UPM could crunch the numbers and serve as the (mostly) dispassionate judge.

I was doubtful that a Gannett newspaper would go for it. And, sure enough, they didn’t back then.

Along came the Great Recession, and it seemed everybody (including my wife) was let go. In the turmoil, the newspaper’s then features editor Annie Oeth approached Evans for a meeting about something. But Evans began talking about creating The Mississippi Bestsellers List. When Oeth said yes to that, Evans said, well, okay, what about reviews by Mississippi writers writing about new books by Mississippians or about Mississippi? She said yes again. 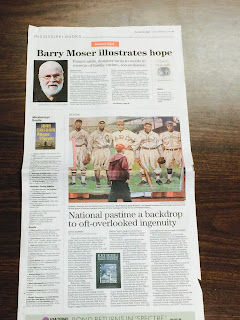 Evans kept the good suggestions rolling, and by January of 2014, UPM publicist Clint Kimberling and I found ourselves part of a team editing and providing two full pages (and often more) of original, local content each Sunday on the Mississippi Books page, which appears both in print and online. Sunday circulation at the Clarion-Ledger, the state’s largest newspaper, considered by the capital and much of the state to be the paper of record, tops 107,000.

When working on this project, I spend most of my time recruiting writers and matching them to ideal books. I lean on the team a lot for great suggestions, too. Kimberling writes articles, reviews, and crunches the sales numbers and streamlines the events calendar.

Every week, [editors lay] everything out to create an attractive spread, which includes periodic pieces by local freelance writer Jana Hoops, who interviews many of the big-name authors who come through Mississippi bookstores on tour.

The project crosses a non-profit scholarly press with an independent for-profit bookstore and an affiliate of a gigantic, publicly held media conglomerate. Yet I find myself amazed and uplifted week after week. At the table when we gather, we are ego-less. We all want great content and a better book culture in Mississippi—nothing less, and nothing more.

Here are some examples of the voices we have brought to Mississippi book lovers lately.

Recently, it was announced that longtime ABC Soaps 'All My Children' and 'One Life to Live' that were recently slated for cancellation in September will continue online. The following is a guest post from C. Lee Harrington, co-editor of the Survival of the Soap Opera: Transformations for a New Media Era .  As a longtime soap fan and co-editor of The Survival of Soap Opera (with Sam Ford and Abigail De Kosnik), I was thrilled to learn that the online distribution company Prospect Park has licensed the rights to All My Children and One Life to Live , slated for cancellation by ABC in September 2011 and January 2012 (respectively). I have followed both programs for decades and was saddened by these series’ demise – and more importantly, by what it seemed to herald for daytime as a whole.  Hopefully, the multi-year, multi-platform deal with Prospect Park, which will make AMC and OLTL accessible both online and on emerging platforms, represents one possible strategy