Skip to main content
Posted by University Press of Mississippi on May 11, 2017

THE LYON IN WINTER
MORT SAHL At 90

Comedian Mort Sahl turns 90 today, May 11, 2017. In honor of his birthday, James Curtis, author of the newly released biography of Sahl, pays tribute to the father of modern comedy. 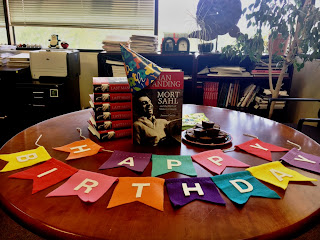 Today Morton Lyon Sahl turns 90, and, in typical fashion, he will celebrate with a performance. The scene will be a 102-year-old theater in Mill Valley, California, some ten miles from where he made his first professional appearance on December 22, 1953. Physically, the years have weighed heavily on him. He walks with the aid of a cane, and his vision, after a stroke in 2008 robbed him of the sight in one eye, limits the newspaper and magazine reading he once did by the hour. Seated in a chair, he’s not the bristling presence on stage he was in his prime, but once he begins to talk, the years melt away and he bears witness to the  twentieth century and what has come since in a way few people can.

Mort is not above making cracks about his age and physical condition. At a 2014 memorial for his pal Robin Williams, he slowly made his way to the lectern as some in the celebrity-laden audience appeared surprised he was still alive. When he finally reached center stage, he leaned into the microphone and said, “I’ve just about paid off my student loans.” More recently, he interrupted his entrance on a Thursday night to comment on the Duke Ellington tune the pianist was using as his theme music. “Don’t you think he should be playing ‘Don’t Get Around Much Anymore’?” he asked. 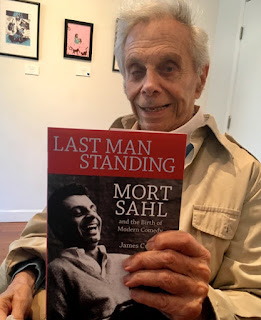 Mort Sahl was always quick-witted, but for more than 60 years the raw material for his act has been politics and current events. In earlier days, he was thought to single-handedly keep entire newsstands in business. Now most of his news comes from cable TV and the Internet. During the Republican primary season, he liked to pick on presumed frontrunner Jeb Bush. (“Now I know the true meaning of No Child Left Behind,” he said.) Presently he takes aim at Donald Trump and his family, often on Twitter: “We’ve had good presidents and bad presidents but never no president,” went a recent tweet. “Ivanka Trump calls herself a feminist. Does that mean she pays the Chinese boys and girls she employs the same $64 a week?” wondered another. “There is a DO NOT DISTURB sign on the conscience of America,” a third concluded.

It’s Mort’s mind that always fascinated me, that ability to think on his feet while using words the way a jazz soloist uses notes. It was a quality fully on display when I discovered him on Los Angeles television in 1966. Later, I saw him live in various venues and got to appreciate how beautifully he filled a small club with his wit. Everyone knew the broad outlines of his life. He started out attacking Richard Nixon, wrote quips for John F. Kennedy, married a Playboy centerfold, tanked his career over his criticism of the Warren Report. I always knew his story would make a good book, and I waited for years for someone to write it. When nobody did, I finally took the plunge after a decade of talking myself out of it.

Last Man Standing: Mort Sahl and the Birth of Modern Comedy took four years to research and write. At the core of that process were 40 hours of recordings I made with Mort, asking him about the details of his life in a way I don’t think anyone else ever had. I expected it to be a difficult process, and in a way it was, since he’s by nature a suspicious and combative man. I think our relationship improved when I was able to turn him on to a Swedish jazz singer he had never encountered. Then for his 87th birthday I gave him a set of Bill Evans CDs, and any chill that remained between us instantly thawed. 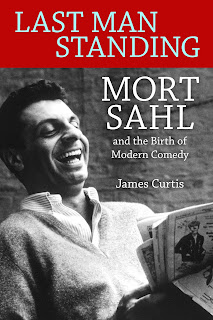 The book was never targeted for Mort’s birthday, and it’s pretty much a coincidence that it was ready for publication within days of the event. Some people wondered why I wanted to write it at all, though that was something I never questioned myself. In my mind, Mort Sahl is not simply a comedian, but a living part of modern history whose memories and observations are both funny and profound. And despite taking as much of a knocking-around as life can deliver, he’s still standing, still at it at a time when most of his contemporaries have passed from the scene, some, like Lenny Bruce, decades ago.

Not long after Mort’s historic debut at San Francisco’s hungry i, the tradition was established of introducing him to audiences as The Next President of the United States. So if you’ve ever laughed at Bill Maher, marveled at the filmmaking prowess of Woody Allen, or been riveted by a Dick Cavett interview, raise a glass today and toast the birthday of The Next President of the United States, the man who influenced them all, the iconoclastic father of modern comedy, the one and only Mort Sahl.

It’s University Press Week for AAUP members like UPM. And once again, we’re participating in the UPWeek Blog Tour.

The theme for this year’s University Press Week is “Celebrate Community,” which is meant to include not only academic or campus communities, but also communities of readers across North America, to the very geographically-based communities in which university presses are based.

With that in mind, we’ve decided to spotlight the community involvement of UPM project editor Valerie Jones. Below read about her extensive volunteer work as a spay/neuter advocate in the Jackson community.


Editing books is my day job, but most weeks I also moonlight as a cat trapper, aka a TNR practitioner. Trap-neuter-retur…