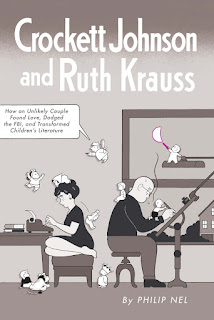 UPM author Phil Nel has a thoughtful and touching tribute to Maurice Sendak on his blog The Most Wild Thing of All: Maurice Sendak, 1928-2012. Nel is is the author of the forthcoming Crockett Johnson and Ruth Krauss: How an Unlikely Couple Found Love, Dodged the FBI, and Transformed Children’s Literature.

Johnson and Krauss influenced and intersected with Sendak throughout their careers and Sendak became a very important figure to Nel’s research. Below are a few excerpts from Nel’s excellent piece.

In June 2001, I went to hear Maurice Sendak speak at Yale University. A couple of years earlier, I’d started working on a biography of Crockett Johnson, and I knew they were close. I had written him to see if he would be willing to chat, but, the previous April, he had declined via a letter from his assistant: “Mr. Sendak does not have any useful recollection relating to Ruth and Dave…. He hopes your research yields more valuable results and best wishes!” So, I thought: I need to try again. I’ll go, I’ll ask him during the Q+A period. When that time came, I was very nervous. He’d already turned me down once. What if he gets angry at me for pestering him? But… I plucked up my courage, and asked.

He looked me in the eyes, and after the briefest pause said Yes. I should talk to him after the Q+A. I did. He wrote his home number down in my notebook, and told me to call.  I did.
I remain astonished at his extraordinary generosity toward me, who (at that time) had published a handful of articles and no books… and yet was going to write a biography. Why even give someone like me the time of day?

This is why. Ruth Krauss and Crockett Johnson — along with their mutual editor, Harper & Brothers’ Ursula Nordstrom — were the most important people in shaping his early career. In the early 1950s, he began visiting their Rowayton Connecticut home on the weekends, while working on Krauss’s books. They were his “weekend parents” who helped shape him into the great artist he would become. He stayed with them many times during the ’50s, illustrating eight of Krauss’s books, starting with the groundbreaking A Hole Is to Dig (1952).

On Crockett Johnson and Ruth Krauss’ influence on his work and where the term wild rumpus came from: 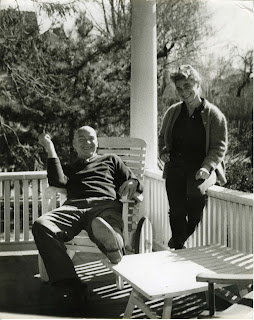 Maurice Sendak became the biography’s third central character.  Dave and Ruth are the two co-stars, but Maurice gets third billing — or would, if the book were a film.  Beyond the decade of the 1950s, when he was collaborating with Ruth and staying with them some weekends, he visited in 1963 when he got stuck working on Where the Wild Things Are.  What should he call the three wordless two-page spreads in which Max and the wild things cavort in the forest?  Dave suggested “rumpus.”  So, just before the wordless pages start, Sendak has Max say, “Let the wild rumpus start!”  Dave and Ruth were so important to Where the Wild Things Are that Sendak has said, “I feel as though Max was born in Rowayton, and that he was the love child of me, Ruth, and Dave.”


On working with Maurice:

Maurice and I collaborated on getting Crockett Johnson’s Magic Beach published in 2005, with an afterword by me and a foreword by him. We kept in touch. Generally, I’d write him a letter, and then a few days later, he’d phone me back. It was always astonishing to pick up the phone and hear Maurice’s voice on the other end. Or to find his voice on your answering machine. I don’t think I ever quite got over the fact that Holy cow, I’m talking with Maurice Sendak.  That, truly, was “the most wild thing of all!”

Go and read the whole piece. It's really excellent.

Philip Nel is the director of Kansas State University's Program in Children's Literature. His biography on Crockett Johnson and Ruth Krauss will be available from UPM in September. 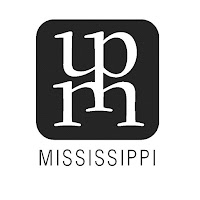