Praise for The Starday Story 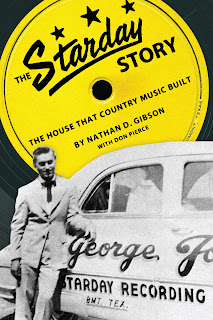 This past weekend, Nate Gibson was awarded the 13th annual 2012 Belmont Book Award for  his book The Starday Story: The House That Country Music Built. The Belmont Award recognizes the best country music book published in the previous year and is awarded by the The International Country Music Conference (ICMC).

Don Cusic, Chair of the Belmont Book Award, told Stacy Harris, "The Belmont Book Award is the most prestigious literary award in country music.  We're very proud to have honored some great books in the past and we're honored to award Nate Gibson's history of Starday this year."

The Starday Story is the first book entirely dedicated to one of the most influential music labels of the twentieth century. In addition to creating the largest bluegrass catalogue throughout the 1950s and '60s, Starday was also known for its legendary rockabilly catalogue, an extensive Texas honky-tonk outpouring, classic gospel and sacred recordings, and as a Nashville independent powerhouse studio and label.

Written with label president and co-founder Don Pierce (1915-2005), this book traces the label's origins in 1953 through the 1968 Starday-King merger. Interviews with artists and their families, employees, and Pierce contribute to the stories behind famous hit songs, including "Y'all Come," "A Satisfied Mind," "Why Baby Why," "Giddy-up Go," "Alabam," and many others. Gibson's research and interviews also shed new light on the musical careers of George Jones, Arlie Duff, Willie Nelson, Roger Miller, the Stanley Brothers, Cowboy Copas, Red Sovine, and countless other Starday artists. Conversations with the children of Pappy Daily and Jack Starns provide a unique perspective on the early days of Starday, and extensive interviews with Pierce offer an insider glance at the country music industry during its golden era.

The Belmont Book Award was presented at the annual International Country Music Conference at Belmont University. The ICMC provides scholars an opportunity to share their work in all aspects of country music.

Recently, it was announced that longtime ABC Soaps 'All My Children' and 'One Life to Live' that were recently slated for cancellation in September will continue online. The following is a guest post from C. Lee Harrington, co-editor of the Survival of the Soap Opera: Transformations for a New Media Era .  As a longtime soap fan and co-editor of The Survival of Soap Opera (with Sam Ford and Abigail De Kosnik), I was thrilled to learn that the online distribution company Prospect Park has licensed the rights to All My Children and One Life to Live , slated for cancellation by ABC in September 2011 and January 2012 (respectively). I have followed both programs for decades and was saddened by these series’ demise – and more importantly, by what it seemed to herald for daytime as a whole.  Hopefully, the multi-year, multi-platform deal with Prospect Park, which will make AMC and OLTL accessible both online and on emerging platforms, represents one possible strategy